Students Meet the Superintendent of Education 2019/01/10

On the final day of the Taiwan trip, the students checked out of the hotel and headed to the airport. They arrived on time safely in Japan and returned to their homes. Over the five days of the trip the students had many experiences and were able to research and learn a lot about Taiwan and Japan.

Today in the morning, the students visited Taiwan National University. A volunteer guide gave them a tour of the campus, explaining the history of the school with a focus on its historical ties to Japan. Afterwards, the students had a discussion about their research project with some university students. For lunch, they ate in the school cafeteria. After lunch, they approached and interviewed students on campus.

In the afternoon, the students did fieldwork at the Chang Kai-shek Memorial Hall. They had dinner at the famous Shilin Night Market.

Today, the students visited the campus of Northwest University. This is the most famous university in Shaanxi Province. They took a tour of the campus and visited a museum which focuses on Buddhist art.

In the morning the students did fieldwork. First, they went to the Paocheuh Temple where they could observe some evidence of the historical ties between Taiwan and Japan. Next, they moved to area near Taichung Main Station. Using historical maps, did a walking touring comparing the old maps with the current city. They found many colonial buildings still in use, including the current city hall.

In the afternoon, the students did an exchange program at Taichung Municipal Taichung Industrial Senior High School. After giving presentations in English, the students had a discussion about their research projects. Later, they took part in some ice-breaking games planned by the Taichung students, took a school tour, and observed some classes.

Dec. 25 (Tue)
Today in the morning the students participated an internship at the local branch office of Kataoka Manufacturing, Local staff gave a presentation explaining the office's activities and local business conditions, and there was a question and answer session. Afterwards, the students gave the English presentations planning to give at the local high school, and received some advice about how to improve it from the staff.

In the afternoon, the students visited the headquarters of Hiwin Technologies, where they heard a presentation about the company and viewed some of its products.

In the afternoon, the students visited the high school attached to Xi'an Jiaotong University. This is the top school in Shaanxi Province. During the opening ceremony, Toba students did a presentation introducing our school. After that, the students participated in classes where they did origami with the Chinese students. Finally, they observed club activities. After the school exchange, the students attended a dinner with some of the host family students and watched a dance performance telling the story of Empress Consort Wu. 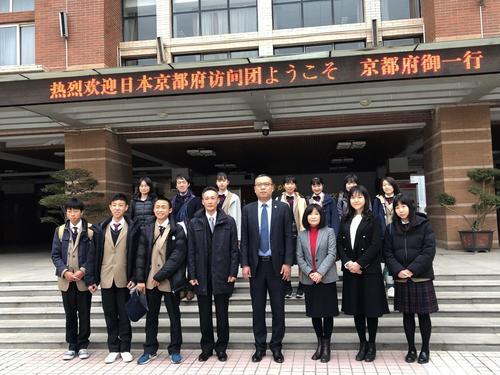 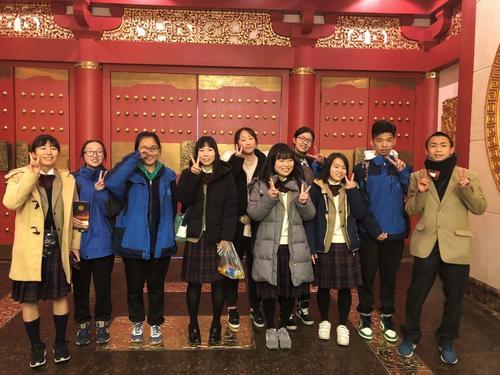 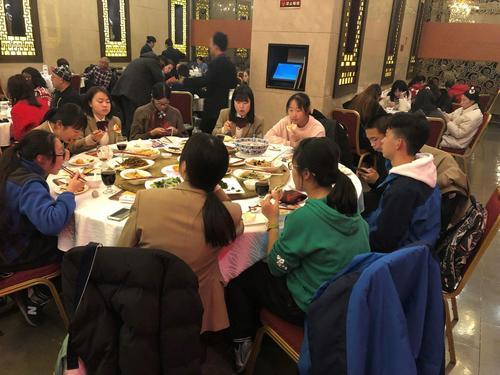 Dec. 25 (Tue) AM
This morning the students took part in an exchange program with students Xi`an International Studies University. After the welcome ceremony, the students broke up into small groups and did a quiz game about Japan and China. Then the students enjoyed eating lunch together. 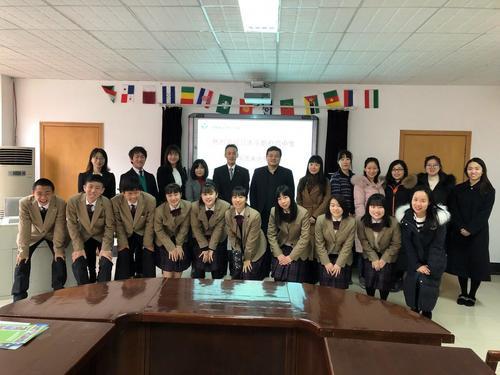 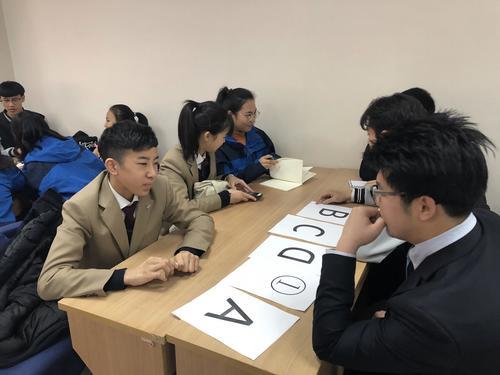 Four students from the ESS Club (Haraguchi Yuki, Fujimori Miu, Nakamura Miku, and club captian Yamamoto Yuki) took part in the Fourth Annual Parliamentary Debate All-Japan Tournament which was held over two days at the Tokyo University Institute of Industrial Science. The team won two out of four matches and placed 35th out of 64 teams overall. In addition, Toba High School was given a special prize for doing debate in class.

Dec. 24 (Mon)
Today the students took part in an exchange program with Xi`an International Studies University. They broke up into small groups and had discussions about cultural differences, then went a tour of the campus. Many of the university students were quite good at speaking Japanese despite only having studied it for three months. After the exchange program, the students attended a dinner at the government offices of the Shaanxi Province. 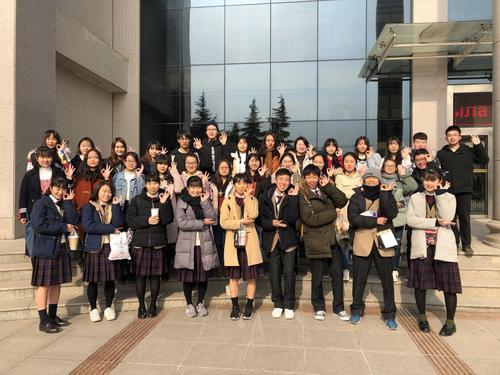 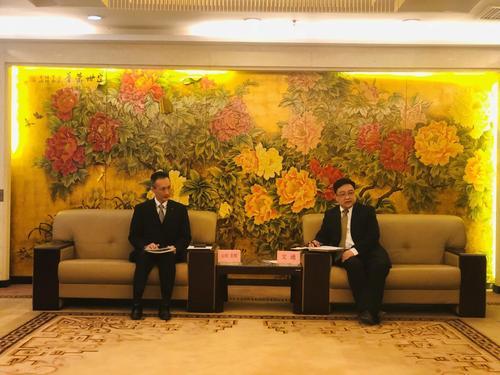 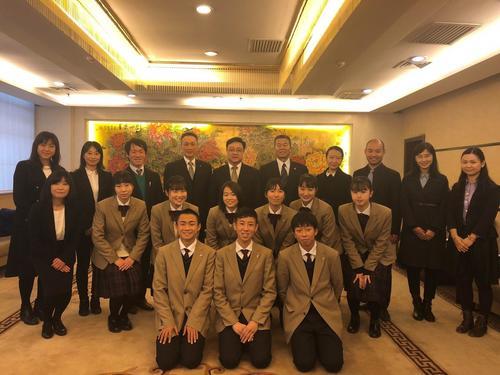 The students arrived safely in Taiwan, and although going through immigration took more time than expected, they were able to complete the first day's activities as planned. After moving to Taipei Main Station, the students went on field work to the Presidential Palace, the red-brick building built during the colonial era. As homework, the students were asked to think about why palm trees are planted around the palace. Following the fieldwork, the group took the Shinkansen to Taichung, where they will spend the night.

This morning six first grade students and three second graders (including eight Global Course students) departed on the SGH Taiwan Research Trip. After meeting early at Kyoto station, the students headed to the airport. Over the next several days the students will visit the local branch office of Kataoka Manufacturing and do exchange programs at local high schools and Universities.

The students returned from their homestays today. Many host students were able to speak Japanese, and the students enjoyed communicating using translation software and the Chinese they have been studying in school. It was a precious experience.

Today, the students visited the Terracotta Army in the morning, and enjoyed wearing traditional costumes. In the afternoon, after viewing the Ming Walls, the students met with their homestay families. 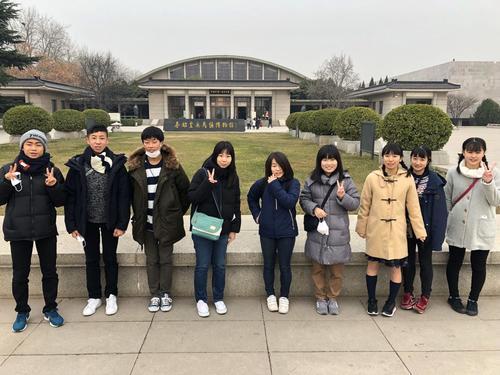 Today, after arriving, the students were given a welcome dinner hosted by the Education Department of Shaanxi Province. The president and vice-president of the friendship association gave a welcome address commemorating the fortieth anniversary of the friendship association of Japan and China and the thirty-fifth anniversary of the association between Kyoto Prefecture and Shaanxi Province. Speeches were also given by Mr. Yamada of the International Affairs Division of Kyoto Prefecture. After the dinner, there was an exchange program with the homestay hosts and local students. 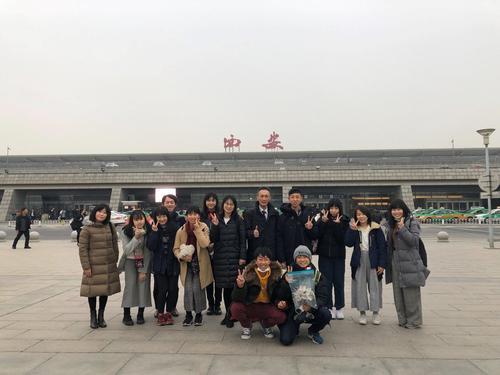 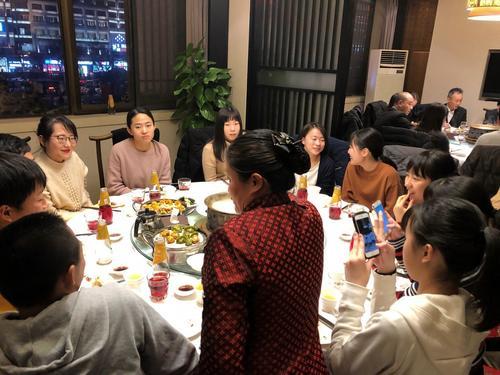 Today, from 1PM the Commencement Ceremony was held for the students participating in the SGH Taiwan Research Trip. Each student spoke about their goals for the trip and made a commitment to do their best. Final details for the trip were also checked. The students depart on Dec. 24 (Mon). 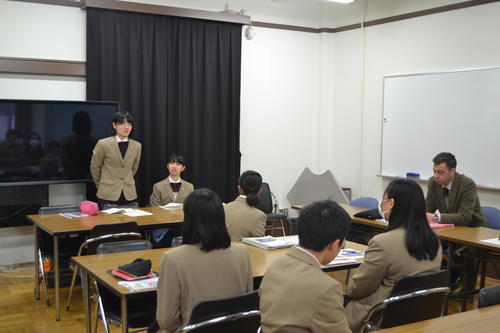 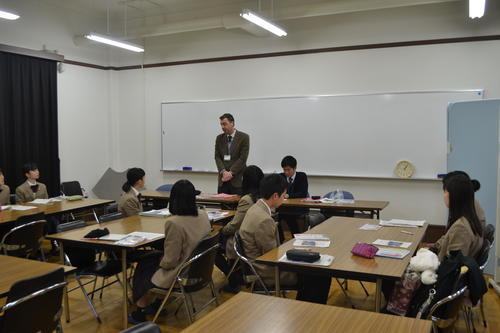 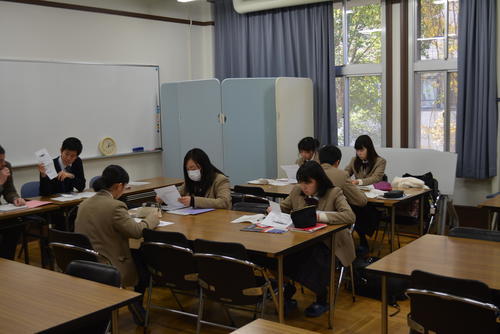 Today, the nine students taking part in the Shaanxi Province Visit Program departed for China. The program includes a homestay, exchange programs with local high school students, visits to museums, and fieldwork. The students are scheduled to return to Japan on Dec. 26 (Fri).

Today, the students participating in the SGH Research Trip to Taiwan participated in a preparatory session in which they practiced their English presentations. The first graders gave presentations based on their Innovation Studies I research projects, and the second graders gave a presentation on the problems faced by Small and Medium-sized Enterprises. The students depart for Taiwan on Dec. 24.

Four students from the second grade Global Course participated in the SGH All-Japan High School Students Forum, which was held at the Tokyo International Forum. In the morning, the students took part in a poster session in which they presented the results of their Innovation Studies II research project. They presented and took questions from the audience in English. In the afternoon, they took part in discussions with other SGH high school students from around Japan and foreign exchange students on the Kakehashi Project. The theme of the discussions was the United Nations Sustainable Development Goals (SDGs). Although the poster presentation did not receive a prize, the students were able to get the valuable experience of interacting with many different high school students from Japan and around the world.

Today the The 16th Annual High School and University Collaborative Forum, which is sponsored by the Consortium of Universities in Kyoto was held at Campus Plaza Kyoto. The theme of the forum was "What kind of skills and abilities should we be cultivating now?" Ms. Yagi Yuka, a second grade Global Course student, took part in a panel discussion on the future of collaboration between high schools, universities, and businesses. She did a great job answering questions from the audience and participating in the discussion.