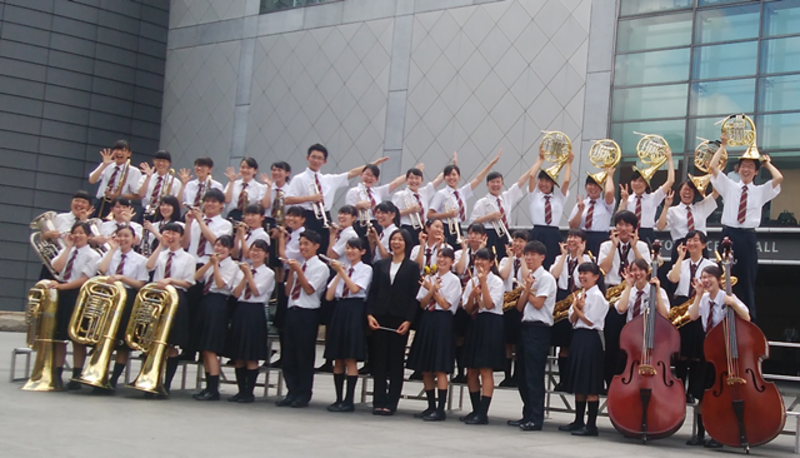 We participated in The High School A Category of the Kyoto Prefectural Band Competition at Kyoto Concert Hall on Friday, August 4, and won the silver prize. We played Scherzando (written by Daisuke Ehara) which is the first set piece and Fluttering Maple Leaves (written by Jun Nagao) which is a free program.

We participated in The Spring High School Band Festival at Kyoto Station Building on Sunday, June 18, and played YMCA and Lupin the Third.

We played Japanese Graffiti ⅩⅡ for the opening of the Welcome Event for new students on Tuesday, April 11. We also played ensemble at lunch time.

We participated in The 43rd Kamogawa Chaten sponsored by Kamogawa Cleaning Party on Saturday, April 8.

This year, OBOG Brass Band was formed for the first time in ten years, and graced this concert. Furthermore, the Broadcasting club cooperated for announcements.
Also, we were helped by Ms. Yamaguchi and Mr. Nishiura, an alumnus of Rakuhoku and now a member of the Osaka Symphony Orchestra).

We appreciate all the support we have received from everyone! We’ll continue to brush up our “Rakuhoku Sound”, and do our best to perform more wonderful music. Please continue to believe in us!

Rakuhoku High School Brass Band was formed in 1966. We perform music in competitions, regular concerts, and elementary schools near our high school. We also play music in entrance ceremonies and graduation ceremonies.